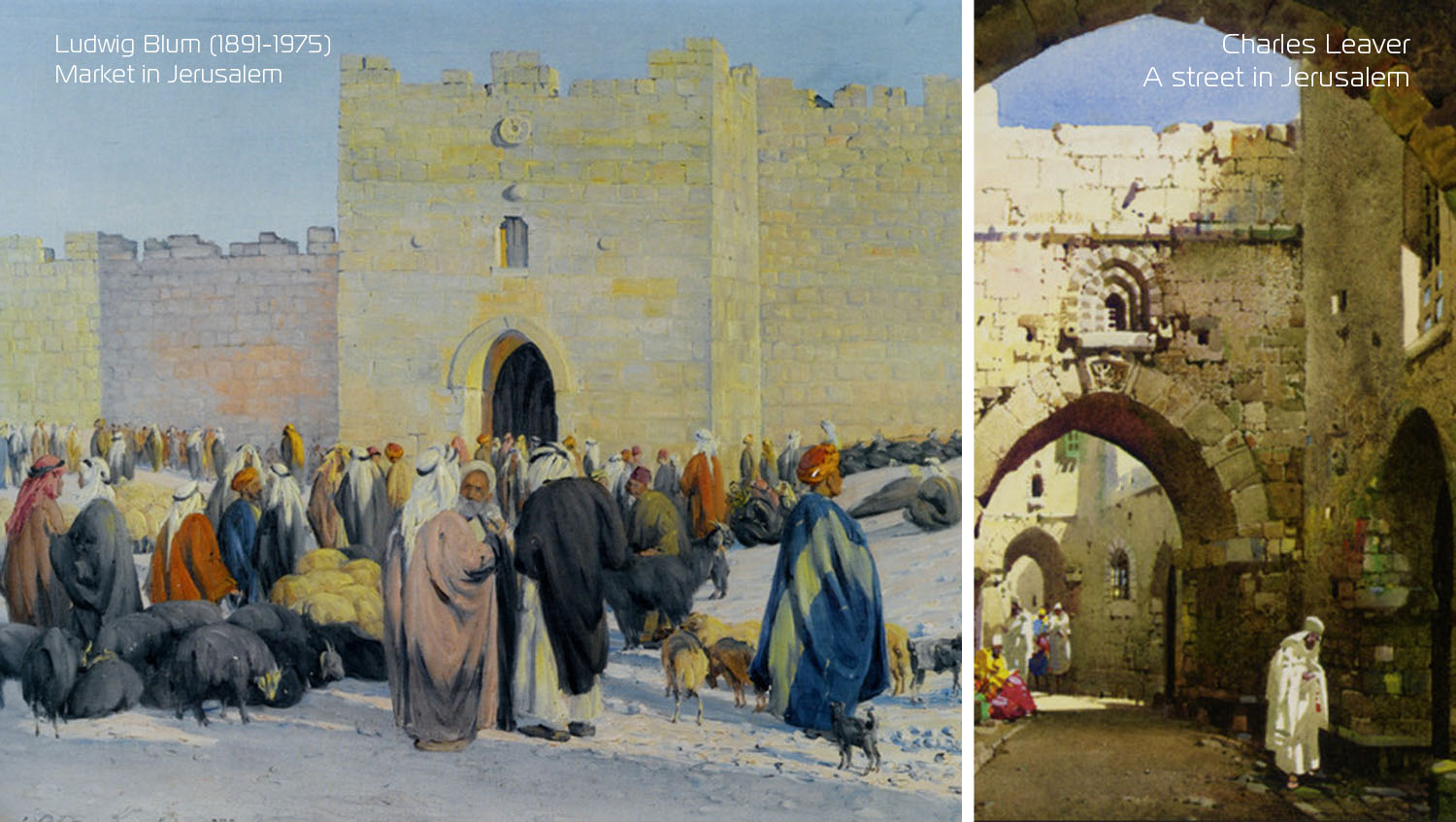 A couple in love, wandering through a street filled with lights, a shop in a city park, majestic cathedrals, workers working to create a huge house, a cozy street drowning in greenery, all this is a city landscape. Painting allowed artists to convey not only the beauty of the sea, flowers and portraits, but also the space surrounding us.

Picture street of the city – the history of the formation of the cityscape, as a separate direction in painting 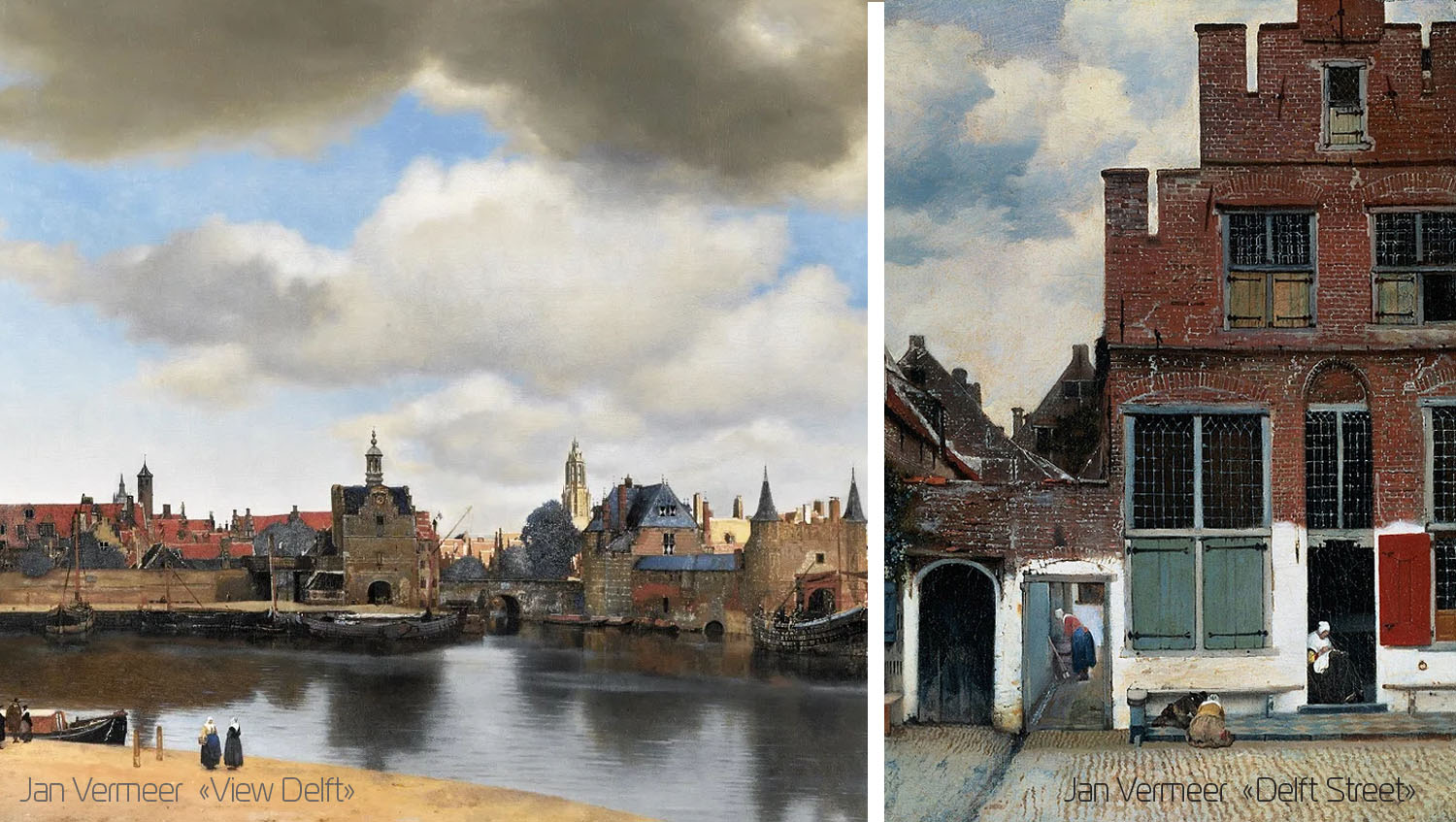 The city painted oil paintings on canvas back in the Middle Ages. But as an addition, mostly to Bible motives. By custom, a famous person was painted on the canvas against the background of a Christian shrine – the city of Jerusalem. In ancient Rome, frescoes depicting urban motifs decorated the public baths of Trajan. But by the seventeenth century, masters of painting from the Netherlands began to paint the cityscape and identified it as a separate direction, the founder, whom Jan Vermeer is considered.
In the Renaissance, when Italian painters presented the world with the discovery of the linear perspective of the picture, the cityscape became very popular. After all, this technique allowed masters not only to depict objects, but also to proportionally compose a composition. The world around us began to be depicted in all its diversity. So in pieces, the discovery after the discovery and this amazing world of the city was born in the picture.
But it should not be assumed that this direction itself remained unchanged. Time changes, the worldview of artists and the cityscape began to be divided into separate views.

Before buying a cityscape, you should understand exactly what types of work of this direction exist.

• Architectural. The paintings of this type of painting most often depict memorable places, the greatness of architectural structures, supplemented by the beauty of nature: sea, flowers, trees, sky. Most of all, the direction was popular in the eighteenth century. 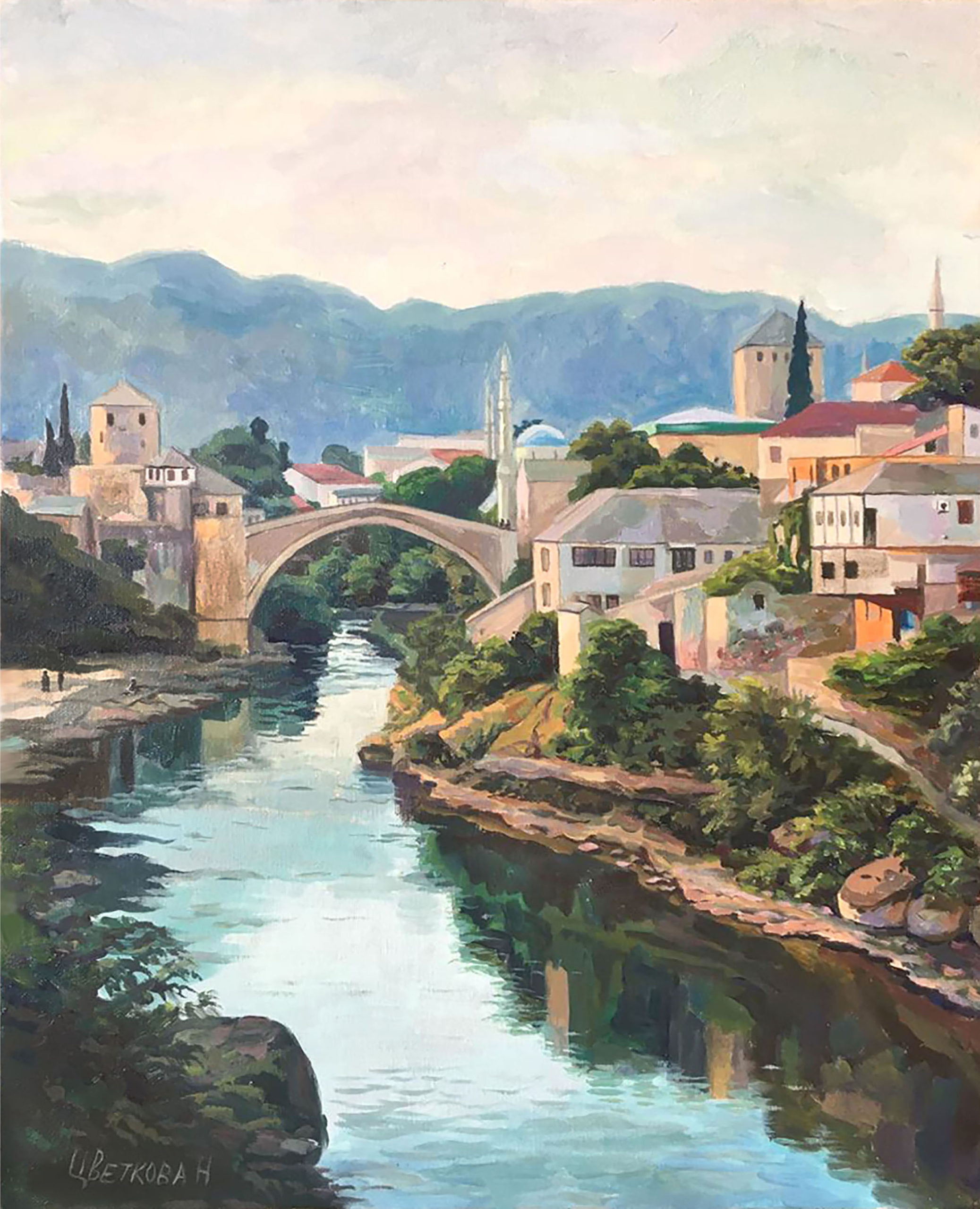 • Capriccio. This type of cityscape was most often depicted by masters of the seventeenth and eighteenth centuries. The paintings depicted the ruins of majestic architectural structures that did not exist in reality.

• Veduta. If you want to buy a picture of the cityscape, then this view is distinguished by its special subtlety of execution, attention to detail and meticulousness. The artist depicts the panorama of the city with strict observance of all proportions. An example is the work “Bridge over the Neretva. Evening “

• Industrial. This type of cityscape originated in the Soviet Union. Most often, the paintings depict the construction of large industrial facilities, the restoration of buildings, agricultural buildings. Greatness of factories, domain, cargo ports and so on. Oil paintings of urban landscapes made in the industrial style are distinguished by the clarity and rigor of the lines.

• Urban. Artists depict on their canvases tall buildings of large megacities, boulevards, roads surrounded by skyscrapers. This can be both an oil painting of the city and watercolor works, depending on what mood the artist is trying to convey. 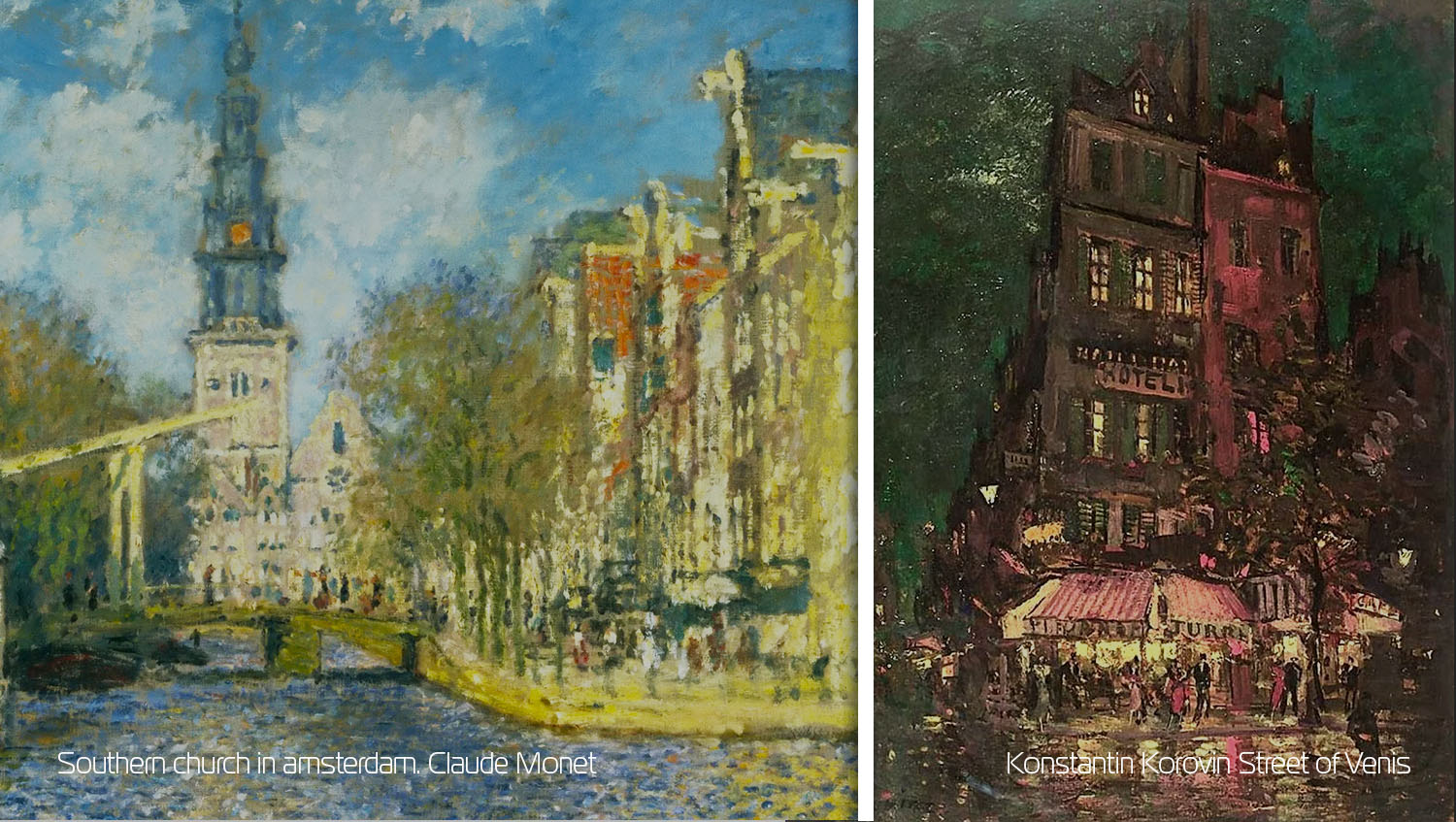 Many famous artists chose cityscapes as subjects for their works.
Claude Monet created in his characteristic manner using strokes. His cityscapes show a common theme. He liked to observe the changes that occur in nature, and tried to convey them on canvas. His oil painting of the cityscape “South Church in Amsterdam” is an example of a magnificent Vedut.
William Merrit Chase tried to create a kind of American style of painting. But he paid tribute to European traditions. His paintings of urban landscapes are filled with light and comfort.
Do not ignore the cityscape paintings by Russian artists. Konstantin Korovin, whose work was strongly influenced by the work of Palenov, loved to write the city. His works are very bright, filled with spring warmth and sunlight, but even more the artist liked to write a night city, paying special attention to detail.

Cityscape in the interior

Many have a desire to buy a picture of the cityscape and decorate their home with it. The canvas should be selected, adhering to several rules, so that the painting not only adorns the room, but also fits harmoniously into it. 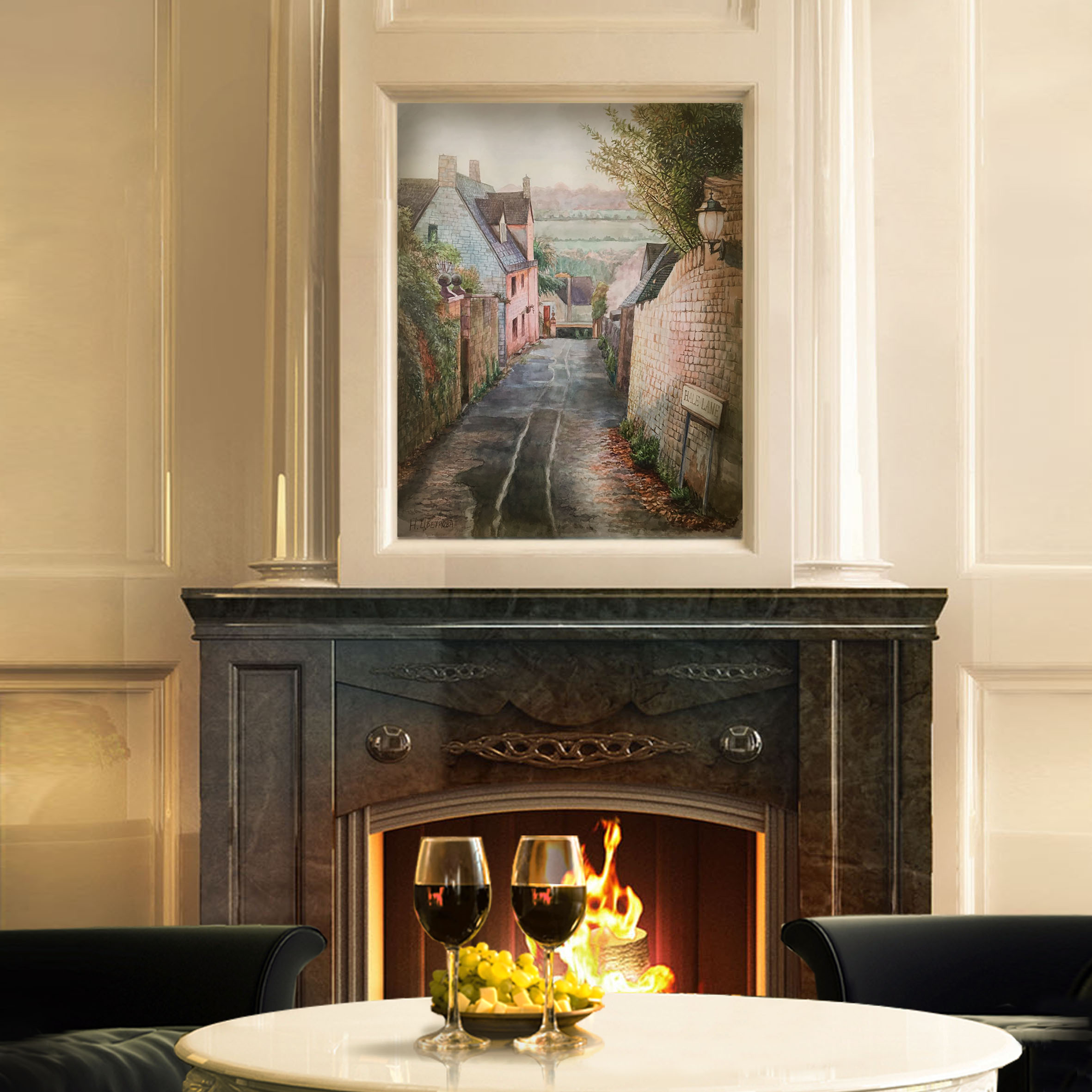 The size of the painting should be such that there is enough space around it on the wall. You can cut a template from paper, glue it on the wall with tape and see how the painting fits into the interior in scale.
The canvas should be at eye level or slightly higher, do not hang it very close to the door, cabinet, sofa so that it is comfortable to look at work.
It is better to choose the style of oil painting cityscapes for the style of the interior.
For neutral room design, any work is suitable. They can be selected in the tone of the environment or, conversely, stand out in contrast.
If the room is designed in the style of Provence, the cityscape can be bright, cozy and sunny. An example is the work “Evening on Hal Line. England “